FOUR OUT OF FIVE FOR SONS

19/01/2013
DUMBARTON gained their fourth victory in five games with a narrow and crucial win against Airdrie United at the Shyberry Excelsior Stadium. 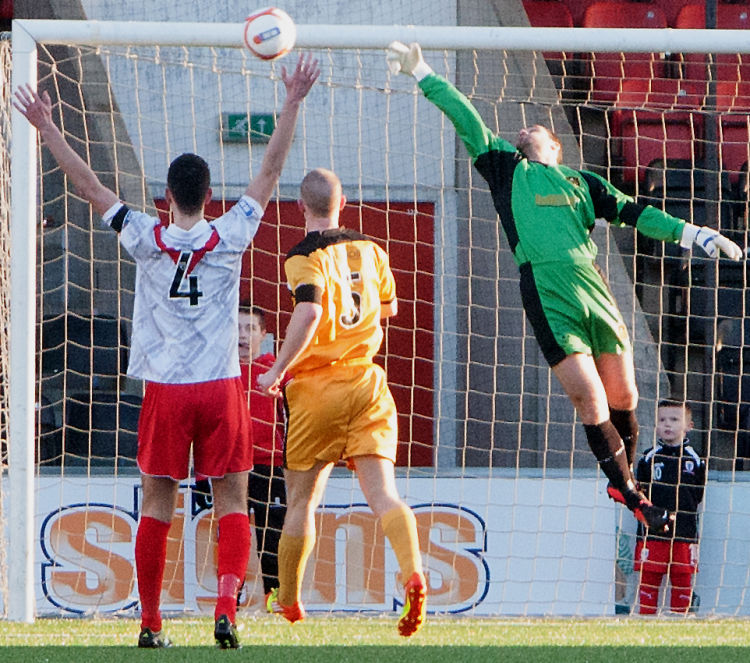 Previous
Next
DUMBARTON gained their fourth victory in five games with a narrow and crucial win against Airdrie United at the Shyberry Excelsior Stadium.

On a bitterly cold afternoon a crowd of 850 enjoyed a red hot contest between the two teams at the bottom of the Irn-Bru Scottish League first division, and a narrow 2-1 victory for the visitors meant that they had finally closed the points gap on their rivals.

The tone was set in the first couple of minutes when keeper Jamie Ewings pulled off a stunning fingertip save (pictured), and from then it was end to end action.

Ryan Donnelly opened the scoring for the Diamonds in 11 minutes with a fine shot after a corner was not cleared, but in 24 minutes Marc McCusker, gaining his first start for Sons, levelled the score with an angled shot.

Six minutes later strike partner Jim Lister capitalised on a Mark Gilhaney cross and netted what turned out to be the winner.

Both sides gave it everything in the second half with play raging from end to end and both keepers pulling off great saves.

Shortly before the end Alan Lithgow headed home what would have been a clincher, and referee Callum Murray signalled for a goal. But then he consulted his assistant, who had kept his flag down during the incident, and mysteriously ruled off the goal.

Not long after that the final whistle blew, and Ian Murray's men and the very vocal supporters saluted a vital victory.
Next
Previous