09/02/2013
DUMBARTON faced Livingston for the second time in two weeks, this time at the Braidwood Motor Company Stadium, and gained revenge by reversing the previous week's defeat. 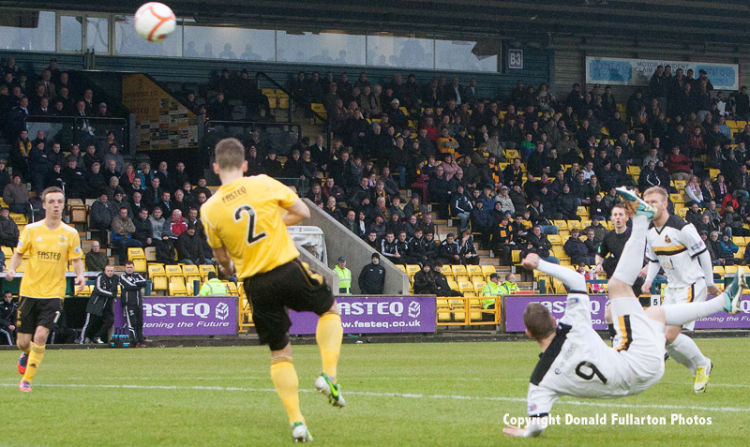 Previous
Next
DUMBARTON faced Livingston for the second time in two weeks, this time at the Braidwood Motor Company Stadium, and gained revenge by reversing the previous week's defeat.

This time a crowd of 1,150 saw another thrilling encounter between the two teams, with five more goals netted to bring the total to twelve in two games.

Sons, with Scottish international goalkeeper Craig Gordon in the dugout as a goalkeeping coach for a day, opened the scoring with a sensational goal by Bryan Prunty. With his back to goal he controlled a Paul McGinn cross on his chest before unleashing an overhead kick (pictured) which was in the back of the net before the keeper moved.

After 20 minutes a poor pass to the keeper by Mark Lamont allowed Jordan Morton to net an equaliser. But a couple of minutes later it was 2-1 as the home keeper caught a corner kick but then dropped it, and Sons skipper Andy Graham had the simple task of netting from close range.

Just before half-time keeper Jamie Ewings, who had made some great saves, pulled down ex-Son Iain Russell in the box, and Russell scored from the resultant penalty.

The second half was pulsating, with end to end action, injures, bookings, a red card — and a penalty for Sons when Prunty was fouled. Scott Agnew placed it out of the keeper's reach for what turned out to be the winner.

Only a bad facial injury to Ewings and the red card for Mark Gilhaney for injudicious language as he was substituted spoiled a great afternoon for Dumbarton, and the result kept them in eighth place in the league, three points ahead of Cowdenbeath and six ahead of Airdrie United.
Next
Previous