SONS ARE STAYING UP

27/04/2013
A FINE 3-2 win over Cowdenbeath at dowdy Central Park ensured that Dumbarton will be in the Irn-Bru Scottish League first division next season. 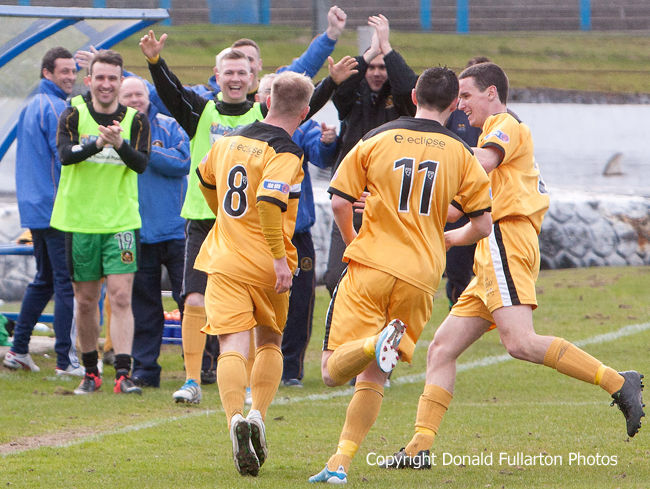 Previous
Next
A FINE 3-2 win over Cowdenbeath at dowdy Central Park in front of a crowd of 650 ensured that Dumbarton will be in the Irn-Bru Scottish League first division next season.

Many of Sons travelling fans were in fancy dress as they cheered Ian Murray's team to a victory which was much more convincing than the score suggests. It means that they will not be involved in the play-offs, and finish as the top part-time team in the division.

It was against the run of play when Colin Cameron's Blue Brazil took the lead in 15 minutes, after a misplaced pass by Garry Fleming allowed a breakaway which ended in Craig Moore netting.

But that only opened the floodgates. Midfielder Scott Agnew was the hero when he chipped the keeper from 30 yards to level the score, and later he netted from the penalty spot after Cameron pulled down Steve McDougall in the box.

In between Agnew's goals, top scorer Jim Lister netted no.2, rising to meet a McDougall cross and heading home powerfully.

Sons continued their domination in the second half and should have had more goals, with Chris Turner, McDougall, Agnew, Andy Graham, Alan Lithgow and sub Bryan Prunty all coming close.

In the 88th minute Kyle Miller netted a second for the home side, but all eyes were then on the ref awaiting the final whistle and three points which made certain that Sons were staying up and the party could begin.

The picture shows the celebrations after Agnew's first goal.
Next
Previous