29/06/2013
DUMBARTON returned to action in their first pre-season friendly when they welcomed Hibernian to the Bet Butler Stadium, and a grabbed a well-earned 1-1 draw. 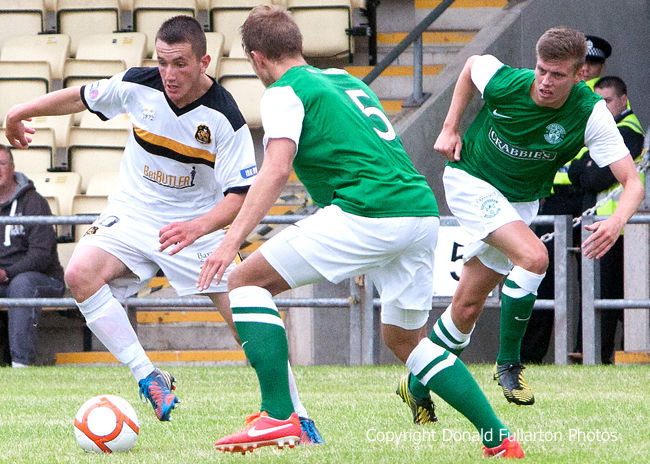 Previous
Next
DUMBARTON returned to action in their first pre-season friendly when they welcomed Hibernian to the Bet Butler Stadium, and a grabbed a well-earned 1-1 draw on a grey but dry day.

A crowd of exactly 1,000, many of them Hibs fans, gathered to watch Pat Fenlon's men play their first game since the Cup Final 34 days earlier and to see a new look Sons side.

Manager Ian Murray fielded new signing Mitch Megginson from Aberdeen, there was a return for Martin McNiff after his loan spell at Annan Athletic, and Ally McKerracher and Joe Coleman, both promoted from the youth scheme, made their first team debuts.

Also in the home team were Nick Phinn, who has not yet been offered a contract for this season until he proves his fitness, and striker Kevin Smith, formerly of Queen of the South, who has been training with Sons.

A Kevin Smith lob over the Hibs keeper which hit the post and bounced out was the closest the home side came to scoring in a competitive first half, while Megginson had a couple of good efforts cleared.

After the break the visitors opened the scoring in bizarre fashion when an Alex Harris effort hit keeper Jamie Ewings, rebounded back to Harris, and rebounded off him into the net. But a few minutes later Sons equalised when a fine run and cross by Megginson enabled 17 year-old McKerracher to shoot home.

There were a few other chances after that, but no more goals, as Dumbarton gave a good account of themselves against the premier division side.

The picture shows Ally McKerracher beating a defender.
Next
Previous