04/05/2014
DUMBARTON travelled to Dens Park with nothing at stake for them, but hoping to spoil the party for the SPFL Championship leaders Dundee. 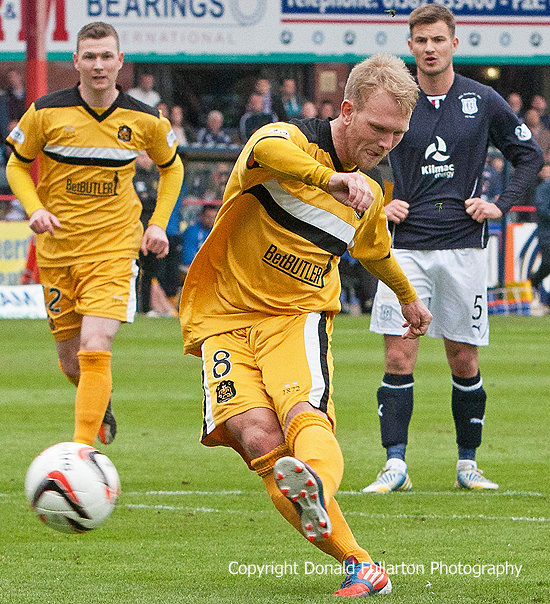 Previous
Next
DUMBARTON travelled to Dens Park with nothing at stake for them, but hoping to spoil the party for the SPFL Championship leaders Dundee.

Nearly 11,000 fans were in the historic old ground, most of them wanting a home win which would give Paul Hartley's men the title and automatic promotion.

Meanwhile Hamilton Accies, beaten 4-1 by Sons the previous week, were at home to already-relegated Morton, needing Dundee to lose to take the title to Lanarkshire. Their goal difference was so much poorer that a draw at Dens Park would probably not be good enough.

Dumbarton started in positive form and had the better of the opening quarter. However a looping header by Christian Nade — named man of the match — just eluded the outstretched fingers of keeper Jamie Ewings to open the scoring in the 25th minute.

Sons fought back, with a Colin Nish header hitting the bar, but then a Peter MacDonald shot from 20 yards made it 2-0 for the home side.

At half-time the Dens men were sitting pretty, but how that was to change. At New Douglas Park Accies started piling in the goals to finish 10-2 winners over the hapless Greenock side, meaning that a draw at Dundee would give Accies the title

Unaware of all this, Sons continued to attack, and they were rewarded in the 70th minute when they were awarded a penalty, neatly converted by Scott Agnew (pictured).

As they pushed for an equaliser, the hearts of the Dundee faithful were in their mouths. Chances galore were made by the visitors, but shortly after keeper Kyle Letheren produced a finger tip save to keep out a Bryan Prunty header, the final whistle blew — and the title party could begin.
Next
Previous