NO SINGING IN THE RAIN

09/11/2014
DUMBARTON slumped to a disappointing defeat at the hands of Queen of the South in front of a 1,677 crowd on a foul day at Palmerston Park, Dumfries. 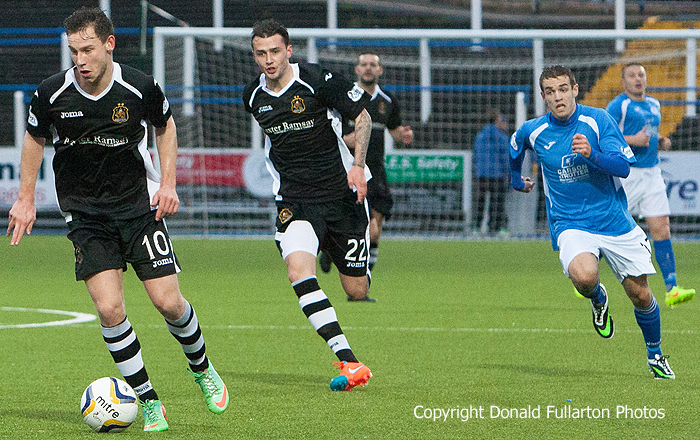 Previous
Next
DUMBARTON slumped to a disappointing 3-0 defeat at the hands of Queen of the South in front of a 1,677 crowd on a foul day at Palmerston Park, Dumfries.

After a run of matches against Hibs, Hearts and Rangers twice, Sons were hoping to make more of an impact against the Doonhamers, but it was not to be.

The rain poured down on the artificial pitch almost all afternoon, and it was the home side who coped much better on the slippy surface. Manager Ian Murray fielded four centre halts in Andy Graham, Mark McLaughlin, Lee Mair and Scott Taggart, but they were unable to stem waves of attacks.

It took a highly debatable decision by ref Craig Thomson to award a penalty when Taggart could not get his arm out of the way of a close range shot before the home side went ahead. Baird converted the spot kick.

Queens had most of the possession as the visitors infuriated their fans by constantly giving the ball away cheaply, and the only surprise was that it took so long for the home dominance to be reflected on the scoresheet.

In the middle of the second half home man of the match Durnin headed home from a corner, and two minutes later Derek Lyle made it three with a header. There was no way back for the visitors, who dropped one place to eighth in the league after this defeat.

Sons have not won a game since late September and have scored only one goal. The manager will hoping that young striker Chris Kane, out for two months through injury, will be fit to return for the next match, a trip to play second bottom Livingston.

The picture shows Mitch Megginson racing forward in one of his side's few first half attacks.
Next
Previous