SONS COULD NOT FIND EQUALISER

18/01/2015
DUMBARTON staged a great second half rally against Raith Rovers at Starks Park, but the equaliser eluded them. 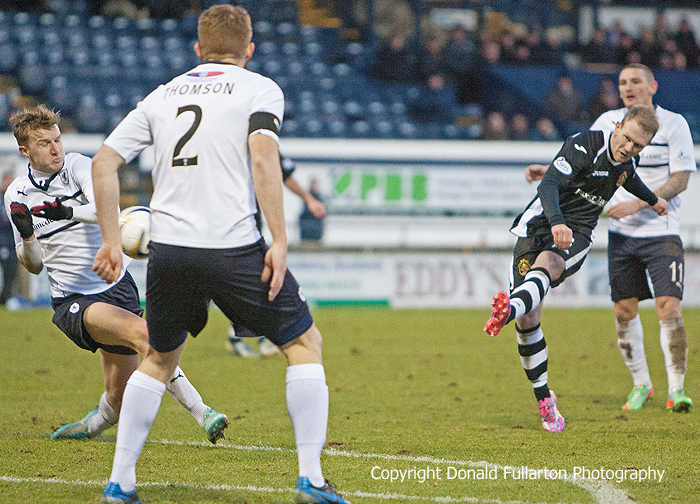 Previous
Next
DUMBARTON staged a great second half rally against Raith Rovers at Starks Park in front of a 1,474-strong crowd, but the equaliser eluded them.

The visitors started the day a point behind the Fifers, but hopes of overtaking them faded during a lacklustre first half when they mounted few attacks and conceded two goals.

The industrious Garry Fleming and Archie Campbell set up some good opportunities, but their shots at goal went just wide.

After 30 minus Sons went behind to a too easily conceded penalty converted by Dumbarton man Ryan Conroy, then Grant Anderson made it 2-0 tthree minutes later with a close range header.

Whatever manager Ian Murray said to his men at half-time seemed to work, as they were a completely different team in the second half and totally dominated the final minutes.

Despite the pressure it seemed that a goal would never come, but then a Scott Agnew shot was only parried by keeper McGurn to Mitch Megginson, who hammered it home.

However joy turned to agony for Mitch soon after, when he hit a golden chance against the bar and over when it seemed easier to score.

A goal-line clearance by a defender then a stunning save by McGurn made sure Sons would not leave with a share of the points.

The picture shows an earlier shot by Agnew which the keeper saved.
Next
Previous