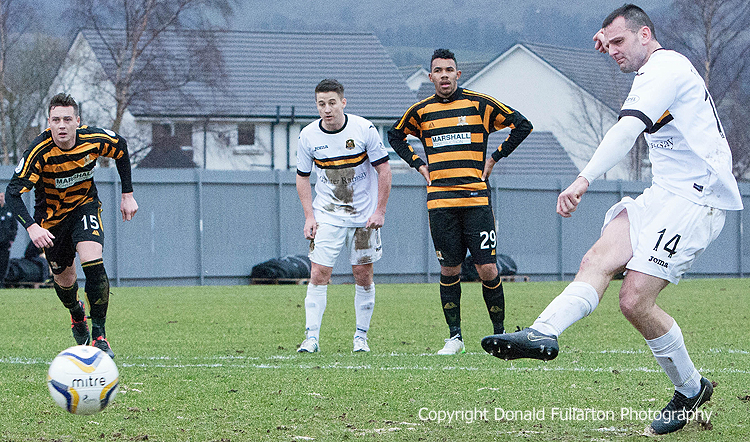 Previous
Next
DUMBARTON gained three vital points at home to fellow part-timers Alloa Athletic on a grey day at the Dumbarton Football Stadium in front of an 841 crowd.

The only goal of a tense and hard-fought contest came in the 42nd minute, when Sons on loan midfielder Dylan Easton was felled in the box by ex-Son Ben Gordon, and referee Andrew Dallas pointed to the spot.

Up stepped Garry Fleming, and he beat keeper John Gibson with a well taken penalty kick. It was to give the home side all three points.

With the wind behind them, Ian Murray's men had the better of the first half and might have had an earlier penalty when on loan striker Chris Duggan was hauled down twice by Gordon.

After the break the visitors, now with the wind behind them, dominated for much of the half and it took resolute defending and some great saves from keeper Danny Rogers to preserve the slender lead.

Right at the end Dumbarton could have made it two, when substitute Mitch Megginson could not quite capitalise on a sweeping attacking move.

The final whistle saw the home side increase their lead over the bottom three clubs in the Championship — and Alloa boss Barry Smith resigned.
Next
Previous