LEADERS TOOK CHARGE IN SECOND HALF

15/03/2015
A PLUCKY Dumbarton side held their own until half-time in front of a 15,731 crowd at Tynecastle, but in the end were well beaten by champions-elect Hearts. 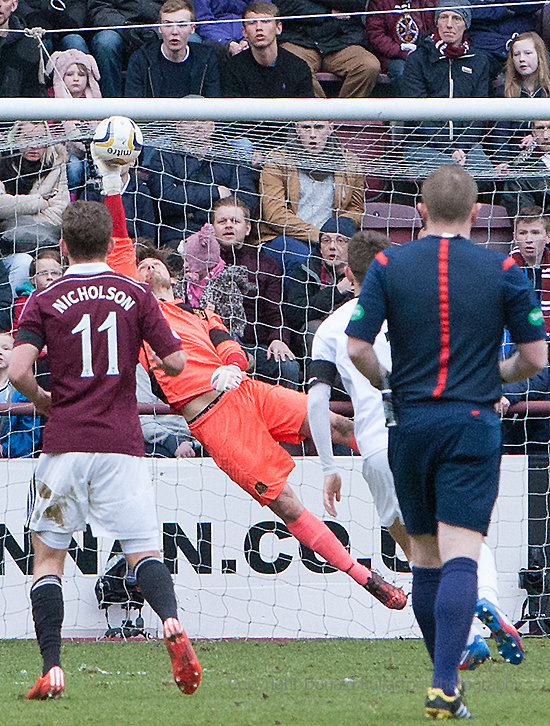 Previous
Next
A PLUCKY Dumbarton side held their own until half-time in front of a 15,731 crowd at Tynecastle, but in the end were well beaten 4-0 by champions-elect Hearts.

With on loan striker Chris Duggan from Partick Thistle unsettling the normally solid home defence, Sons matched their illustrious opponents for most of the opening 45 minutes, but the nearest they came to scoring was a Duggan shot which tested keeper Neil Alexander.

In the early minutes of the second period the noisy Sons travelling support hoped for more of the same, but the breakthrough came for Robbie Neilson's men when Osman Sow netted in a goalmouth scramble. Protests that keeper Danny Rogers — pictured making a fingertip save — had been fouled by were waved away.

It took several minutes before Hearts captain Danny Wilson made it 2-0 when he headed home from a corner, and the home side took charge.

The scoreline was inflated in the final five minutes when Hearts sub Billy King made it 3-0 with a fine solo effort, and then hammered in a fourth right at the end.

At the start of the match there was a minute's silence in memory of Hearts and Scotland legend Dave Mackay who died a few days earlier at the age of 80.
Next
Previous