18/10/2015
DUMBARTON fought bravely but were unable to end Hibs unbeaten league record in front o an 8,200 crowd at Easter Road. 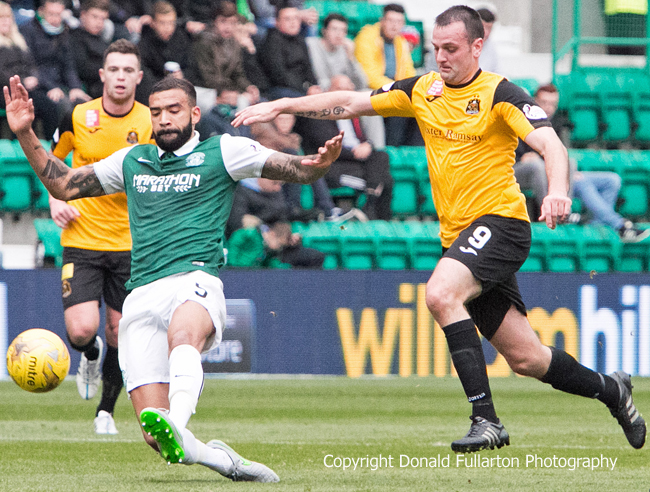 Previous
Next
DUMBARTON fought bravely but were unable to end Hibs unbeaten league record in front of an 8,200 crowd at Easter Road.

Stevie Aitken's men adopted a defensive strategy, hoping to hit on the break, but they were under pressure throughout.

On 20 minutes Dominique Malonga produced a superb curling shot from the edge of the area to give the home side the lead.

Seconds later Dumbarton were level thanks to a fantastic 16-yard strike from Grant Gallagher, assisted by Jordan Kirkpatrick.

The drama continued on 26 minutes when a poorly defended free kick left Liam Fontaine to head home straightforwardly for 2-1 to Hibs.

A third for the Easter Road men came thanks to a soft looking penalty. It was converted by Jason Cummings, in the face of offside protests from Sons — not long after Stevie Saunders had made a miraculous, acrobatic clearance off the line.

Hibs pressure continued relentlessly as it became ever darker in the second half, and on 59 minutes James Keatings slotted the ball in for 4-1 after outpacing Sons defence.

Then Dumbarton's Steven Craig headed home his first goal for the club from a floating Mark Docherty free kick on 73 minutes. But Sons could not add to their total.

The picture shows Garry Fleming surging past Liam Fontaine and shooting.
Next
Previous