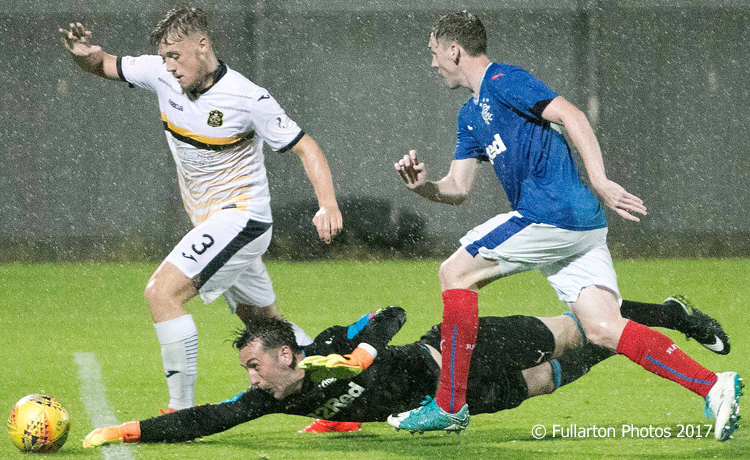 Previous
Next
DUMBARTON beat Rangers 20s 2-1 to progress into round two of the Irn Bru Cup at the YOUR Radio FM103 Stadium.

Within two minutes Sons were in front. A foul by the visitors' Aidan Wilson right in front of referee Gavin Ross led to him pointing straight to the penalty spot.

Calum Gallagher stepped up confidently to smash the ball into the top right-hand corner of the net for 1-0.

A few minutes later Rangers 20s had a chance to equalise from a free kick just outside the area after an infringement by skipper Andy Dowie. But the ball skimmed harmlessly into Scott Gallacher's arms.

Rangers enjoyed a sustained period of pressure in the middle of the half, but Dumbarton pushed back and came close when a fine Kyle Hutton strike beat ex-Son Ross McCrorie, the Rangers captain, but crashed against the woodwork.

Four minutes after the restart Mark Stewart latched on to a great cross to slide the ball past keeper Aidan McAdams to make it 2-0 to Sons.

Dumbarton started to look well on top as the heavens opened and torrential rain fell. But Rangers weathered both storms and fought back.

On 72 minutes Ryan Hardie pulled a goal back for the 20s from a counter-attack, slicing through Sons defence.

Rangers pressed for an equaliser at the end, but Dumbarton held solid to see out a well-worked 2-1 victory in this first round tie.

The picture shows Chris McLaughlin beating keeper McAdams, but he then shot wide.
Next
Previous