06/05/2018
A GUTSY display by Dumbarton overcame a fighting Arbroath side in the Ladbrokes Championship Play-off Semi-Final at the newly renamed C&G Systems Stadium. 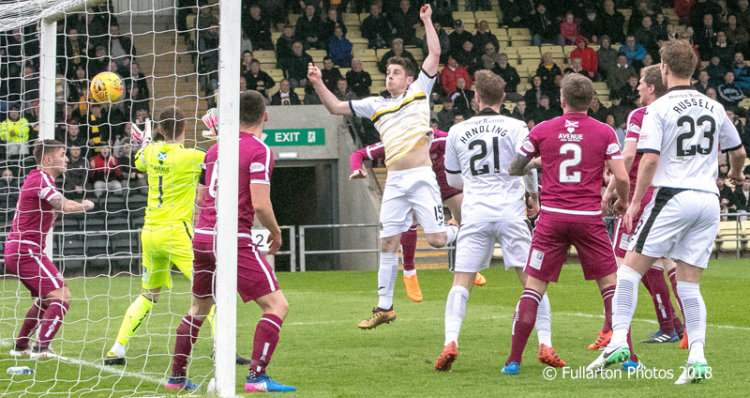 Previous
Next
A GUTSY display by Dumbarton overcame a fighting Arbroath side in the Ladbrokes Championship Play-off Semi-Final at the newly renamed C&G Systems Stadium in front of an 872 crowd, with a 3-2 aggregate win.

Now they will face a team full of ex-Dumbarton players when they play Alloa Athletic away and then home in the final, with their place in the Ladbrokes Championship at stake.

It was an ideal start for the home side, as Dougie Hill powered home a header from Tom Walsh's corner to put Sons 1-0 in front on the day and 3-1 up on aggregate (pictured).

The game swung back and forth from that point, until on 27 minutes Arbroath's Gavin Swankie capitalised on a mix up at the back to poke the ball under keeper Scott Gallacher and into the net for an equaliser.

Dick Campbell's Red Lichties sensed a further opportunity and applied massive pressure for the remainder of the half. But Dumbarton hung on doggedly.

Immediately after the break Sons missed a chance to extend their lead, as Tom Walsh's low effort was cleared off the line after slipping under the goalie.

Both teams had chances in a nervy second half, but Arbroath kept their momentum from before the break and dominated much of the possession. But Dumbarton held firm until the final whistle.
Next
Previous