17/02/2019
DUMBARTON gained their first away win of the year with a well-deserved 3-0 win over Stranraer at Stair Park. 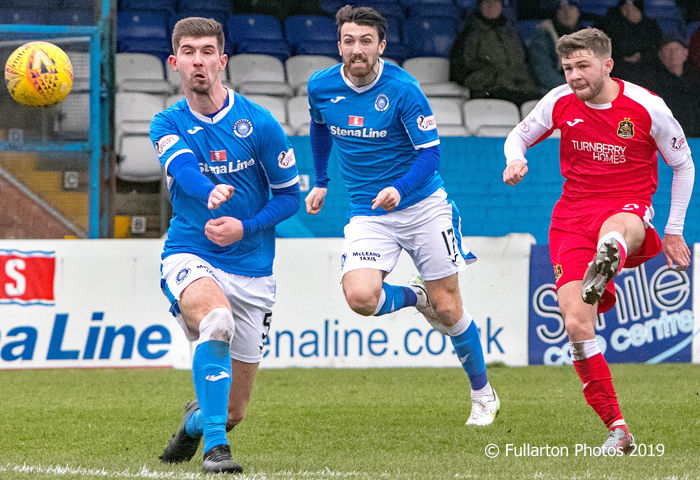 Previous
Next
DUMBARTON gained their first away win of the year with a well-deserved 3-0 win over Stranraer in front of a 320 crowd at Stairs Park.

Three second half goals secured a victory and a vital three points for Sons, who were the better team in the first half but were unlucky to go into the break without a lead.

However, the men from the Rock continued to apply the pressure after half time, and were finally rewarded on 55 minutes.

A breakaway for the visitors gave Dom Thomas ([i[pictured below earlier in the game) the opportunity to lay back the ball for skipper Ross Forbes, and he curled it into the top corner of the net from the edge of the area.

On 73 minutes Stranraer went a man down. Central defender Andrew McDonald was dismissed for the second time this season following a second yellow card for tripping Bobby Barr as he tried to lead a Sons counter.

On 79 minutes it was 2-0 to Sons. Thomas's effort from the edge of the box beat Max Currie in the Stranraer goal and settled in to the bottom corner.

Dumbarton sealed the points with a third goal on 83 minutes, as Ross Perry smashed his shot home from close range following a corner.

The result lifts Sons into eighth place in Ladbrokes League One, ahead of Stranraer on goal difference and two points beyond Stenhousemuir.

It was the first time Dumbarton had won at Stair Park for 16 years.
Next
Previous