03/03/2019
IN torrential rain and a gale Dumbarton beat League One leaders Arbroath 2-0 — their first away defeat since last April. 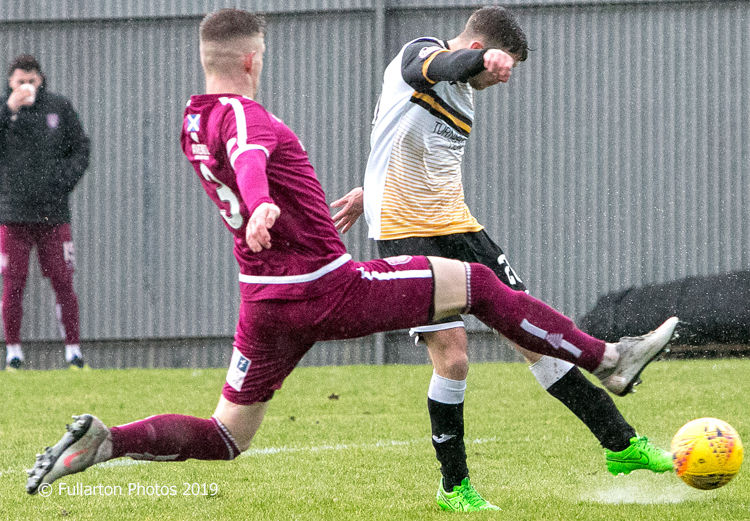 Previous
Next
IN torrential rain and a gale Dumbarton beat League One leaders Arbroath 2-0 in front of a 700 crowd at the C & G Systems Stadium — their first away defeat since last April.

For the first half hour of the game both sides battled as much with the elements as with each other.

But Dumbarton stood their ground against a reshaped Arbroath, and were rewarded when the referee pointed to the penalty spot after Ross Forbes was tripped on the edge of the area.

The Red Lichties 'keeper went the right way from the spot kick on 29 minutes, but skipper Forbes drilled the ball hard and low to make it 1-0 for Sons.

The visitors started the second half with real intent, but it was Dumbarton who edged further ahead on 52 minutes.

A ball through from Man of the Match Bobby Barr found Dom Thomas, who drove it home on the near post with a fine strike (pictured), giving Sons a 2-0 lead.

Arbroath made three substitutions just after the hour, and looked determined to fight back. But the men from the Rock stood firm.

The closing stages of the game saw gales sweep the pitch for several minutes.

Then the visitors went down to ten men on 80 minutes when sub Michael McKenna was sent off for a second yellow card offence, diving in the area.

Dumbarton continued to press, and had several chances to extend their lead. In the end they were more than satisfied with a vital, hard won three points.
Next
Previous