DANCING IN THE STREETS OF RAITH!

24/03/2019
DUMBARTON fans, all 77 of them in the 1,400 crowd at Starks Park, did not enjoy their trip to Kirkcaldy to face promotion contenders Raith Rovers. 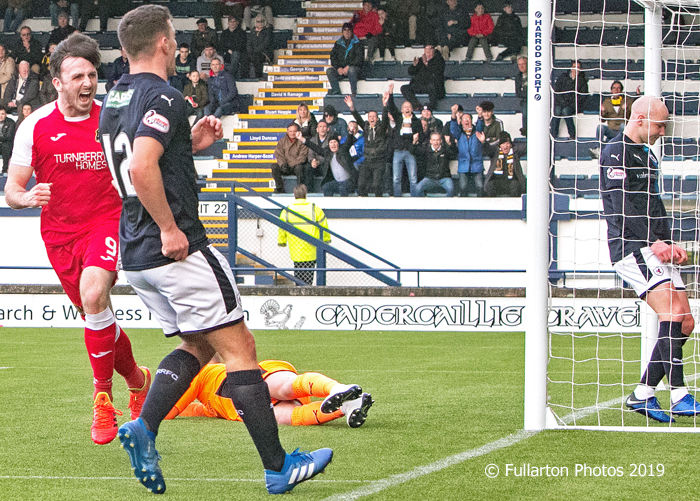 Previous
Next
DUMBARTON fans, all 77 of them in the 1,400 crowd at sunny but cold Starks Park, did not enjoy their trip to Kirkcaldy to face promotion contenders Raith Rovers.

The Fife men started strongly, and within nine minutes were a goal in front. A swift one-two out to the wing and straight back into the box was neatly side-footed home by Raith's Ross Matthews.

Sons pressed back, but struggled to find a way through the organised Rovers defence.

Then on 26 minutes the home side went 2-0 up. A couple of slips allowed Raith through. David Ferguson cleared for Dumbarton, but was unlucky to see the ball slip to Liam Buchanan, who finished well.

On 38 minutes Sons were back in it. Bobby Barr got on the end of a smart pass down the right and put the ball across to Calum Gallagher, who finished from close range to pull the score back to 2-1.

That good work was undone on 44 minutes when a long cross was nodded in for 3-1 by ex-Son Kevin Nisbet just before half-time, despite strong protests from Dumbarton over a push.

The second half provided no relief for Sons. On 54 minutes Grant Adam beas away Jamie Gullan's shot, but Nisbet was on hand to head in the rebound for his second and Raith's fourth goal.

Substitute Iain Russell almost pulled one back for Dumbarton on 81minutes, flinging himself at a cross, only to see his header smash into the crossbar.
Next
Previous