04/04/2019
A SPIRITED fightback earned Dumbarton a point at home to Airdrieonians at the C & G Systems Stadium . . . and set a new club record. 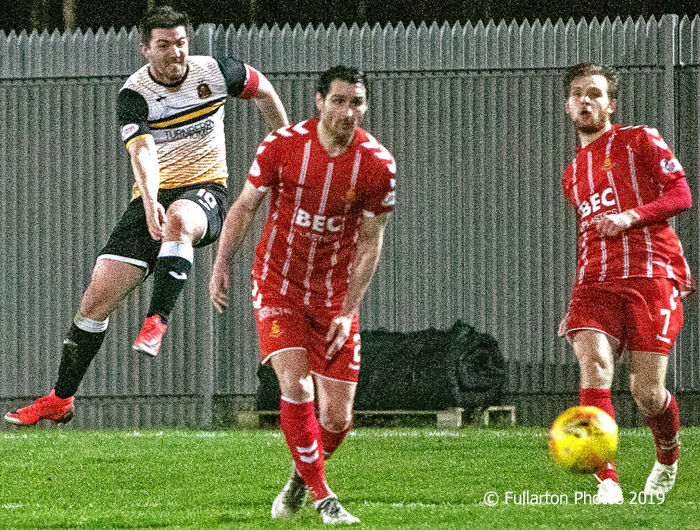 Previous
Next
A SPIRITED fightback earned Dumbarton a point at home to Airdrieonians at the C & G Systems Stadium . . . and set a new club record.

It meant that they drew all four league matches against the same side for the first time since the current league format was introduced.

There was little between the teams in a tight opening period, before Sons took the lead cleverly on 21 minutes.

The opener for the home side came from a quickly worked free kick by Ross Forbes to Dom Thomas, who struck hard and low past the keeper as the Diamonds defence froze.

However, Dumbarton's lead did not last long. A throw-in was glanced towards goal on 27 minutes and then headed in by Scott Stewart for the Airdrie equaliser.

The visitors were ahead five minutes later when Leighton Mcintosh cut the ball in behind Sons defence and Darryl Duffy scrambled it home to give Airdrie a 2-1 lead.

After the break Dumbarton came out with plenty of determination and went close to scoring three times in rapid succession, securing several corners.

The game surged back and forth from that point, but without either side being able to turn pressure into goals.

Sons finally got the leveller their determination deserved on 75 minutes. Another Forbes free-kick was headed across goal by substitute Boris Melingui and finished by Calum Gallagher for 2-2.

The home side were all-out for a winner now. But it was Airdrie who scored next, with Scott Stewart grabbing a goal at the near post after a pacy counterattack on 79 minutes.

But Sons were not done. On 82 minutes Ross Forbes made it 3-3 (pictured), drilling the bell into the far corner. That is how it ended after a breathless second half.
Next
Previous