SONS ARE STAYING UP!

21/04/2019
A COMPREHENSIVE 3-0 win over East Fife at the sunny C & G Systems Stadium made sure of Ladbrokes League One survival. 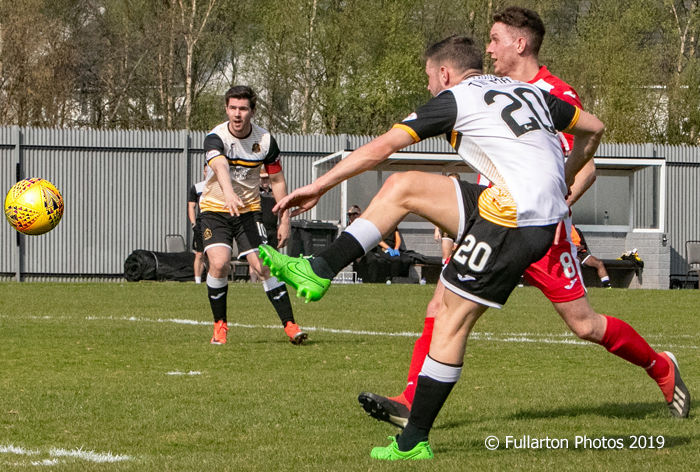 Previous
Next
A COMPREHENSIVE 3-0 win over East Fife at the sunny C & G Systems Stadium made sure of Ladbrokes League One survival — completing four wins out of four against the Bayview men this season.

The 659 crowd saw most of the early pressure come from the Fifers, captained by ex-Son Scott Agnew.

The visitors were within an inch of opening the scoring on six minutes when Aaron Dunsmure's back-post header crashed off the bar.

However, it was Dumbarton who took the lead on 20 minutes when Craig Barr latched on to the ball following two quick corners and slotted it home for 1-0.

Sons really started to turn on the pressure from this point, coming close on several occasions before Dom Thomas made it 2-0. His weaving run from the side ended with a well-placed strike (pictured).

East Fife almost hit back immediately after the restart when, on 46 minutes, Grant Adam was called into action to push Dunsmure's effort over the bar.

Then on 65 minutes Dumbarton looked to have wrapped up the points when the Chris Higgins misjudged the bounce of a ball and Calum Gallagher punished him by slotting through the legs of the onrushing keeper Brett Ling for the third Sons goal.

The result, along with defeats for Brechin City and Stenhousemuir, meant that Dumbarton were safe from the drop-zone with two games remaining.
Next
Previous