06/05/2019
DUMBARTON'S revival in Ladbrokes League One ended with sixth place after the final match away to champions Arbroath. 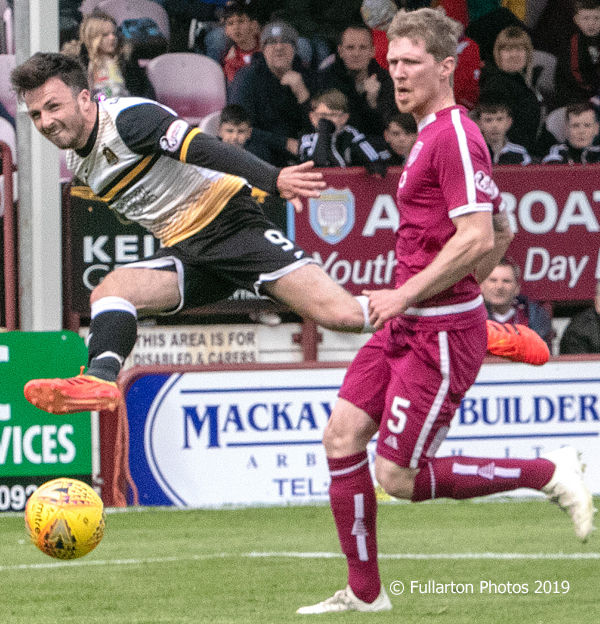 Previous
Next
DUMBARTON'S revival in Ladbrokes League One ended with a 1-1 draw and sixth place after the final match away to champions Arbroath in front of a surprisingly quiet crowd of 1,373 at chilly Gayfield Park.

Sons gave a well deserved guard of honour to League title winners the Red Lichties before the kick-off.

The opening 45 minutes was a largely even and goalless affair, although the hosts started stronger.

Calum Gallagher, Stuart Carswell and Ross Forbes came closest for Dumbarton in the first half.

After the break the visitors opened the scoring.

On 54 minutes Dom Thomas drilled the ball across goal for April Player of the Month Calum Gallagher (pictured), who touched it neatly beyond the Arbroath 'keeper for 1-0.

However, Sons were down to ten men on 61 minutes, as Cammy Ballantyne made a fine save to deny a Lichties shot, but did so with his hand —- thereby conceding a penalty and receiving a red card in the process.

Arbroath's Michael McKenna promptly dispatched the spot-kick to level the scoreline at 1-1.

That is how it stayed untll the final whistle. The result means that Dumbarton finish in sixth place in League One, with 46 points from 36 games.
Next
Previous