SONS COULD NOT REPEAT COMEBACK 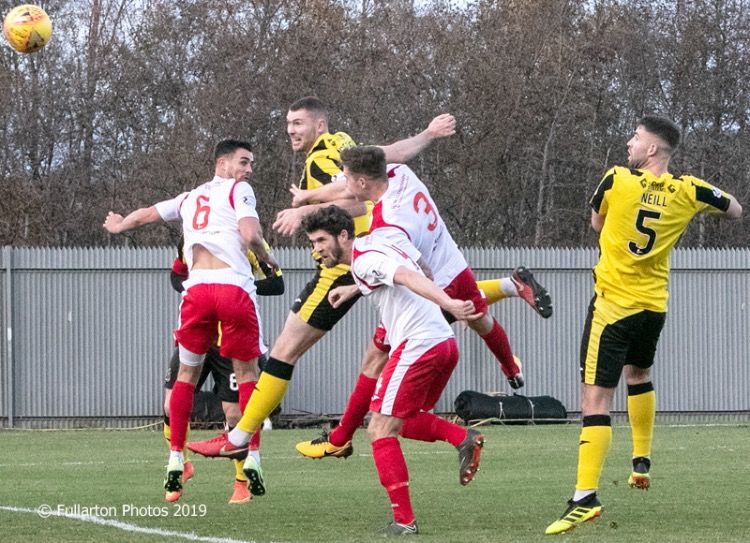 Previous
Next
DUMBARTON fought back from 2-0 down against in form East Fife in front of a 702 crowd at the C & G Systems Stadium to level the score, but in the end lost 4-2.

The visitors moved to joint top of the Ladbrokes Scottish League One, while Sons sank to sixth place.

After a slightly shaky start for both teams on a bitterly cold day, East Fife took advantage of some loose Sons defending on just 7 minutes.

Danny Denholm found himself through on goal and slotted the ball past keeper Conor Brennan to give the visitors an early lead.

Then on the half hour Liam Watt slid in at the back post to double East Fife's lead.

But Dumbarton struck back three minutes later. First, Ryan McGeever crashed home a superb header from Joe McKee's cross to bring it back to 2-1 (pictured).

Then on 38 minutes Sons were back on level terms. Great work from PJ Crossan who skipped past a defender and drilled the ball across goal, where it was touched in by the Fifer's Craig Watson for 2-2.

The breathless action continued after the break. On 53 minutes Brennan did well initially to block Steven Boyd's shot, but the striker was on hand to sweep the loose ball home.

Liam Watt made it 4-2 to East Fife on 64 minutes, weaving through the Sons defence to strike the ball smoothly past Brennan.

There was another late rally by Dumbarton, but it was not enough to get back into the game.

The Sonstrust Man of the Match, chosen by West Coast Accountancy, was Kyle Hutton.
Next
Previous