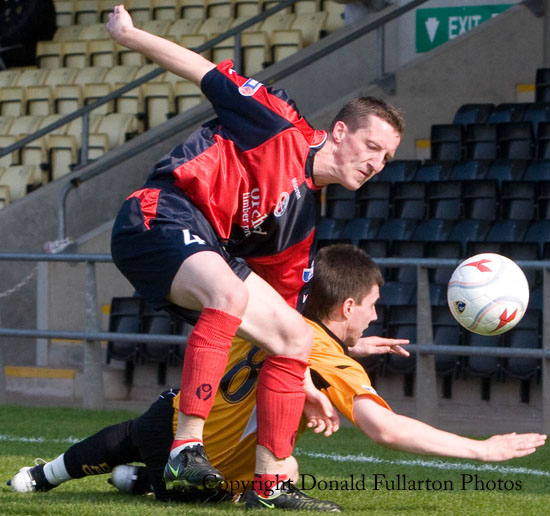 Ex-Son Craig Winter clashes with Ross Forbes.
Previous
Next
A comprehensive 4-0 victory over Dick Campbell's Forfar Athletic, themselves still bidding for a play-off spot, took Sons to the top of the table. With two matches left to play, they lead Cowdenbeath by two points and East Stirling by three.

Any early tension was eased when fit again midfielder Ross Clark passed the goal across the goalmouth and a defender netted an own goal. A few minutes later on loan Hearts striker Denis McLaughlin was all on his own at the far post as he headed home no.2.

As half-time approached a mesmerising run by fit again striker Derek Carcary ended with the Forfar keeper and a defender colliding, and Derek stroking the ball into the net to make the score 3-0.

After the break Sons continued to dominate, and any hopes the visitors harboured were shattered when keeper Dave McEwan saved a penalty kick. Not long after that, sub striker Keiran Brannan from the 19s broke clear and beat diving keeper John Gibson for the fourth goal.

Meanwhile fans glued to their trannies heard that Cowdenbeath, having opened the scoring, were losing 2-1 at Montrose — just the result needed for a delighted Dumbarton to leapfrog them into first place.
Next
Previous